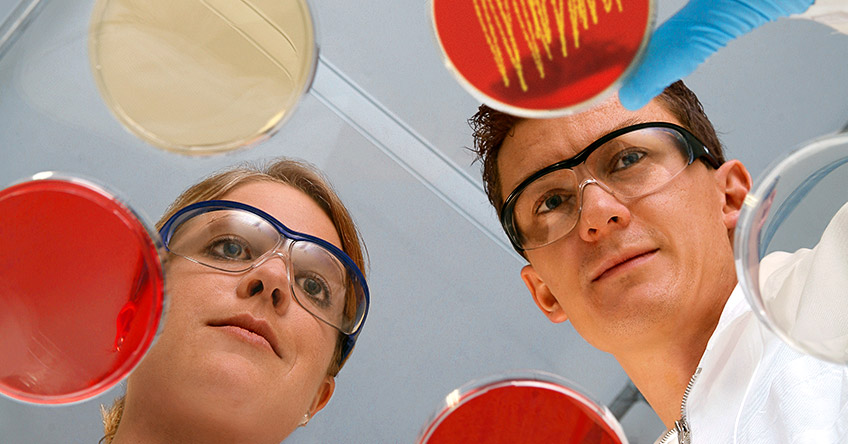 Salmonellae are rod-shaped, gram-negative bacteria which, not only cause significant disease in pigs, but are considered to be among the most important food-borne pathogens. Globally more than 2500 types have been described for Salmonella worldwide in animals, humans and in the environment; the two most relevant in pigs are S. Choleraesuis and S. Typhimurium.

Clinical Signs and Lesions Systemic Salmonellosis is a severe clinical disease, caused by S. Choleraesuis. It may affect pigs of all ages, but is most common in pigs older than eight weeks of age, and typically occurs at 12 to 14 weeks of age. The main clinical sign is a watery diarrhea. In the systemic form acute septicemia and pneumonia may be observed. Clinical signs include fever, depression, inappetence, respiratory distress and coughing, the number of dead pigs may be increased. In salmonella infections small and large intestine both can be affected, with necrotizing to ulcerative typhlocolitis as typical lesion, in sites where lymphoglandular complexes are present. Enteric Salmonellosis is a milder disease caused by S. Typhimurium. While clinical signs in pigs may be observed, too, it is even more relevant as a foodborne pathogen.

Diagnostics and Control Bacterial culture or PCR methods are available to detect Salmonella in clinical specimens or to identify isolates. Serological tests, especially ELISAs, are suitable for monitoring the status of a pig herd.
Due to subclinical infections, the detection of Salmonella in feces (especially after enrichment) or the detection of antibodies alone do not prove salmonella as the causative agent in an acute disease. Histological examination to differentiate Salmonellosis from Ileitis and Swine Dysentery is a valuable supplemental procedure.

Vaccination Live attenuated vaccines as well as killed bacterins have been developed for vaccination against Salmonella. As Salmonellae are facultative intracellular, enteric pathogen vaccination with live oral attenuated bacteria is considered the most effective way to protect pigs. Application through the drinking water provides the most convenient, animal and user-friendly way to administer a Salmonella vaccine.
The latest innovation in this field is Enterisol® Salmonella T/C, introduced in the USA in 2014. It is the first and only live oral vaccine targeted as an aid in preventing disease due to both S. Choleraesuis and S. Typhimurium.